Drafting of the Paper

Not a whole lot yet because of mid-terms last week, plus lost about 2 days when I couldn't get Texmaker installed in Ubuntu properly.

Blarg
Posted by Will McBurney at 5:53 AM No comments:

These are Win Tie Loss statistics based on Mann-Whitney for IdeaSupervised and Unsupervised for 20 datasets and below are some initial rankings for Cocomo81s and Kemerer comparing all methods. For the rankings im not sure if they are correct, maybe you could have a look and give me some feedback. 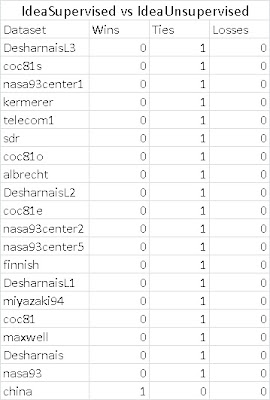 Taking Size Out of Data Sets

For the time being I have cocomo, nasa, sdr and desharnais data sets.
The comparison of with-size vs. without-size results for the top13 solo-methods are here.
Posted by Ekrem Kocaguneli at 11:54 PM No comments:

The 400 Project
> A "master list" of "rules" of game design
Much literature on game design and methodologies. They say to "tune" the game after you design/develop it. But nothing found on methodologies for "tuning".
> Some games involve beta process. Takes in lots of feedback, only one chance to revise.
> Some games have testers who report feedback quickly. Many chances to revise.
> > Testing process draws out and takes time: lots of money.
> Want something that does not involve testers
Working on Qualifier Paper & Presentation
> Section I: History of Gaming and other background information
> > Pre-computing era (Ancient Civilization - 1950)
> > Early Computing Era (1950 - 1980)
> > Computing Era (1980-2000)
> > Golden Age of Gaming (2000 - present)
> Section II: Overview of Games Studies, and Role of Engineering in Games Studies
> Section III: My own research (and what kind of Games Studies it is)
Revise an unsuccessful game into something successful
> Tons of games which are unsuccessful
> Study these games and analyze them
> > What went wrong?
> > Suggest revisions that could have made them successful instead
> I'm currently studying an old game called Deadly Towers
> > Writing up a review and making suggestions to fix it
> Coding up a game could take months
> > Working on existing game code involves coding in assembly
Posted by Joe at 11:48 PM No comments:


Haibo He, Member, IEEE, and Edwardo A. Garcia

Abstract—With the continuous expansion of data availability in many large-scale, complex, and networked systems, such as surveillance, security, Internet, and finance, it becomes critical to advance the fundamental understanding of knowledge discovery and analysis from raw data to support decision-making processes. Although existing knowledge discovery and data engineering techniques have shown great success in many real-world applications, the problem of learning from imbalanced data (the imbalanced learning problem) is a relatively new challenge that has attracted growing attention from both academia and industry.

The imbalanced learning problem is concerned with the performance of learning algorithms in the presence of underrepresented data and severe class distribution skews. Due to the inherent complex characteristics of imbalanced data sets, learning from such data requires new understandings, principles, algorithms, and tools to transform vast amounts of raw data efficiently into information and knowledge representation.

In this paper, we provide a comprehensive review of the development of research in learning from imbalanced data. Our focus is to provide a critical review of the nature of the problem, the state-of-the-art technologies, and the current assessment metrics used to evaluate learning performance under the imbalanced learning scenario.

Furthermore, in order to stimulate future research in this field, we also highlight the major opportunities and challenges, as well as potential important research directions for learning from imbalanced data.

interesting lit stuff
Posted by timm at 6:04 AM No comments:

The last version of the paper with new results and text for the sanity check section (see pages 15 to 18) is here.

We can submit(?) within this week (after a proof-read and a little tweaking).
Posted by Ekrem Kocaguneli at 12:37 AM No comments:

A report with a total of 27+4(for references) pages on our side is here.
Posted by Ekrem Kocaguneli at 7:02 PM No comments:

Storn and Price suggested a total of ten different working strategies for DE and some guidelines in applying these strategies to any given problem.
K. Price, R. Storn, and J. Lampinen, "Differential Evolutionâ€”A Practical Approach to Global Optimization" Berlin, Germany: Springer, 2005.
_R. Storn and K. Price, "Differential evolution: A simple and efficient heuristic for global optimization over continuous spaces" J. Global Optimization, vol. 11, no. 4, pp. 341-359, 1997. _
None work best in all circumstances. Suck it and see!

When building the candidate, select the opposite value of each numeric range
Results show a 20 to 40 percent improvement.

Wilcoxon ranked-sum or Mann-Whitney U test in Bash! on Idea

Idea versus 90 solo methods using the statistical Matt-Whitney U test. 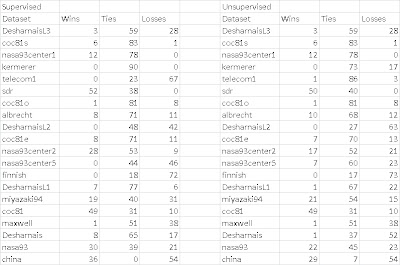 Posted by Raymond at 6:06 AM No comments:

How would data cluster 90 solo-methods

The procedure for each data set can be summarized as follows:


The results of the above procedure are incorporated into the jiggle paper on p16-17.
Concise summary of results:

Posted by Ekrem Kocaguneli at 11:33 PM No comments:

Spectral learners are those that deal with the eigenvectors of a space.


Why spectra? Well, according to Wikipedia:


This idea of the spectrum actually sums up years of my own thinking. SE theory has treated a software project  as "one thing" when actually it is a spectrum of things- and we can best study it if we study the data's spectrum).

So, there is a relatively recent newer class of learners that base their reasoning on the eigenvectors.  If you don't know what is an eigenvector, they are the invariant properties of a matrix. Its direction, if you will. For example, if we take the eigenvectors of a co-variance matrix, we get the major directions of that data For more, see http://www.slideshare.net/guest9006ab/eigenvalues-in-a-nutshell or http://www.cs.otago.ac.nz/cosc453/student_tutorials/principal_components.pdf (the first is better for visuals, the second is better for explanatory text).

Now I raise this snince Andrew's learner and the IDEA that Raymond is working with spectra since these are based on Fastmap and...

First published in 1995, FastMap algorithm has been significantly elaborated since then. Wang et al.’s MetricMap algo- rithm tries to replace the iterative projections of Figure 2 with a single multi-profject method [43]. See also the theoretical analysis of Platt that shows that FastMap and MetricMap are really instances of a broader class of what is known as Nystrom algorithms [44]; i.e. they are based on the Nystrom approximation of the eigenvectors of a large matrix.

So we are doing spectral learning  which means that, in theory, our ASE'11 paper could be greatly improved a learner that uses the eigenvectors directly rather than the FASTMAP approximation.


For yet more on spectral learning, see (in stuff/doc):

Note the last paper. The clustering method andrew and me "invented" in 2010 actually dates back to 1998. sigh. our only innovation was to (1) approximate the eigenvectors with fastmap and (2) try it on SE data and (3) compare it to results from the global spalce.

The Age of Big Data 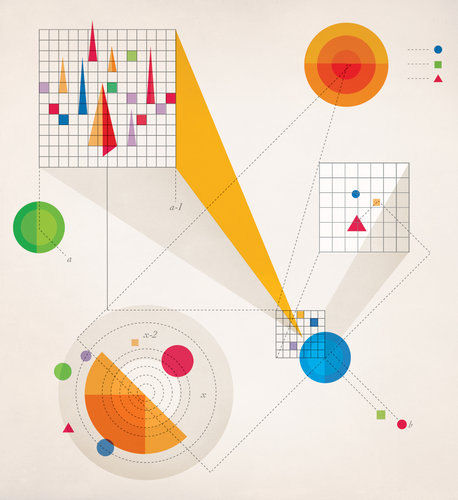 Veteran data analysts tell of friends who were long bored by discussions of their work but now are suddenly curious. “Moneyball” helped, they say, but things have gone way beyond that.

“The culture has changed,” says Andrew Gelman, a statistician and political scientist at Columbia University. “There is this idea that numbers and statistics are interesting and fun. It’s cool now.”

To see the whole article:  http://goo.gl/iLQNE Simon Sinek:  “people don’t buy what you do, they buy why you do it.”
e.g. Martin Luther King did not say "I have a plan", instead, he said "I have a dream."

e.g. Apple works this way:
If we find a "why" that other people want, you we can sell our papers, sell our software, sell our careers.

e.g. I have a journal paper with ten times the usual number of citations in that particular journal. That paper had
So, what is the "why" or ai@wvu ? What is the dream we want to sell the world in our work, in our papers?

We are done with the active learning paper (waiting for reviews). Submission this week.

Read all the available information on Grammatech and placed them here.
Started writing the report. The draft is here.

Read more »
Posted by Ekrem Kocaguneli at 1:21 AM No comments:

Idea supervised vs. unsupervised
View more PowerPoint from Raymond6
Posted by Raymond at 12:45 AM No comments:

Click here to see the results
Posted by Jarilyn Hernandez at 9:31 PM No comments: