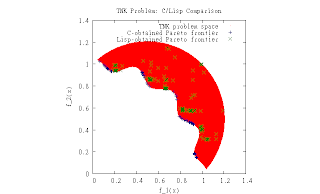 This was the first comparison between the C version and my version. I would have made a new graph, but I somehow lost the C frontier data. I saw that something was very wrong, so I have spent a lot of time trying to fix it. This is as close as I've gotten thus far: 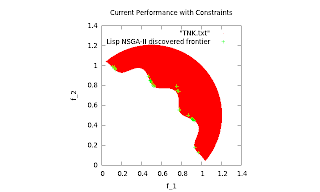 The results are closer, but something is still missing.
Posted by Joseph at 7:06 AM No comments:

How to find data for effort estimation

How to Find Relevant Data for Effort Estimation

Primarily, we are going to look at the Fonseca data set.

The final curve I was able to generate after 10 generations of running which looks like this:


It is worth noting that the frontier does not approach f1(x)=0 or f2(x) = 0. Also, on the bottom (leg) of the curve, we see less consistency. This did not seem to improve with future generations.

The overall progression of the generations is here:


After generation 5, very little seems to change other than a slight change between generations 6 to 9:

Numeric results have not yet been calculated.
Posted by Will McBurney at 5:25 AM No comments:

Kernel paper is good to go with 10 pages of replies. The latest pdf is here.

Not shockingly, the field that is an order of magnitude larger than the others most affects the data

By comparison, when looking at the other fields, few of the percentages were substantially different from 20% (if, within a class, each of the possible values had a 20% distribution, it would mean true random distribution)

Insofar as progress into Which and NSGA-2, I've made progress, though due to illness, not as much as I would like. Hopefully to complete both (or at least 1) by next week with some results.
Posted by Will McBurney at 5:08 AM No comments:

I am working on a modified NSGA-2 to converge on the Pareto frontier in fewer generations than the standard version.  My idea is to use clustering to determine the region of independent variable space that is the most promising of those tried in a given generation.  By knowing the best spatial region, it should be possible to generate solutions in that region to gain more information than could be gathered breeding initial poor solutions.

My first attempt took a rather simple approach.  I made it so that the fast non-dominated sort (FNDS) chose some percentage of the parents for the next generation, and the rest were generated within the most promising space as determined by the above sort.  This space was determined by clustering solutions by reducing the standard deviations of the independent variables down to a minimum cluster size of 20, then selecting the cluster that had the lowest mean frontier rank.

This attempt seems to have some promise.  Here is a graph showing the baseline performance of the standard NSGA-2 on the Fonseca study: 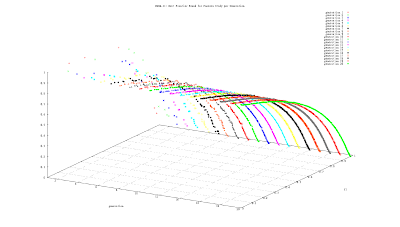 This is a graph of the two objective scores for all members of the first-ranked frontier for each generation.  By generation 20 (far right), NSGA-2 has found a very nice distribution of answers across the Pareto frontier.  The first generation that looks close enough to me is generation 14.  Note how the first few generations are rather noisy; it isn't until generation 8 that the solutions starts to mostly lie on the Pareto frontier.

As a counterpoint, here is a like graph of my modified NSGA-2.  For this run, FNDS selects 80% of the parents, and the remaining 20% are generated from the best cluster: 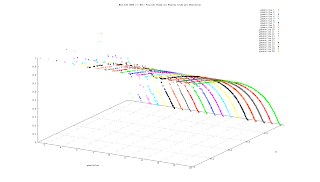 There seem to be diminishing returns from this approach, however.  After the baseline NSGA-2 has "discovered" the Pareto frontier, it smoothly converges onto it and distributes solutions across it rather nicely.  My modified NSGA-2 seems to be injecting noise that keeps it from converging smoothly across the solution space.  This is probably because NSGA-2 is designed to distribute solutions across the Frontier, whereas my current clustering approach searches only one part of it.  Furthermore, no adjustments are currently made to account for the algorithm getting closer to the answer, so good solutions are getting replaced by guesses made by the clusterer.

For the next step, I will explore ways to make the clusterer explore all the promising spaces as opposed to just the best one, and also to dynamically adjust the ratio of FSDN-selected parents to cluster-selected parents based upon the proximity to the Pareto frontier.
Posted by Joseph at 10:59 PM No comments:

Wrapping up after the quals

1. ESEM 2011 Talk: Version1 of our presentation is here.
2. The papers waiting for revision are:

3. Design of experiments for unsupervised feature selection. My action-plan is:

4. Design of experiment for the ET test. My action plan for the paper is:
Posted by Ekrem Kocaguneli at 9:31 PM No comments:

Very recent topic about Traditional AI and Game AI, and what is best for entertainment in games.

We are still very far behind in terms of "good AI"; Game developers tend to avoid Traditional AI

"Game Developers don't get paid to be clever" - most of the stuff in games today are just tricks, smokes and mirrors, designed to increase believability and make for better games.

The important part is to make a fun and compelling game. Traditional AI takes lots of time and memory, and it doesn't even get used much.
Posted by Joe at 6:28 PM No comments: 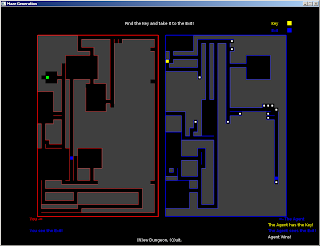 Dungeon Game is updated with a simple competitive game play. You need to find the key and then take it to the exit (faster than the Agent.)

We want the Agent to play like a human, so that the game is fair, and as fun as it can be.

The Algorithm powering the Agent is based simply on how I think humans explore. However, data is forthcoming on how humans really explore.

Screenshot: The Agent wins.
Posted by Joe at 6:22 PM No comments: