A Simple Approach to RDR

Gaines and Compton [1] explain Ripple Down Rules pretty simply by analyzing Compton's Reconstruction of the GARVAN ES-1 diagnostic system. GARVAN ES-1 was one of the world's first medical expert systems to be put into routine use and interpreted medical reports for thyroid hormones measurements in blood samples.

The idea behind RDR is combining a dynamic, incremental rule based hierarchy with human experts. Given data and domain specific knowledge, the knowledge based system can make assumptions about a space. The human interaction involved is to repair broken rules created by the system or to provide further insight to the system itself. 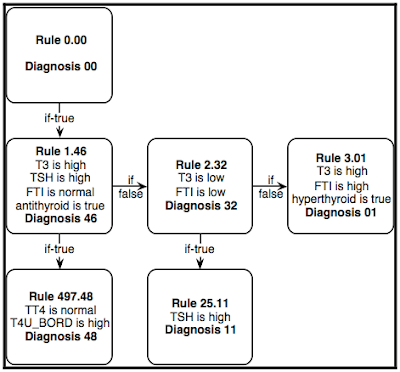 Take a look at the GARVAN RDR tree supplied by Gaines and Compton. The system begins at a root node where the first rule (0.00) diagnoses that there isn't an instance of thyroid disease. Obviously this rule is always true so, in decision tree fashion, we follow the 'if-true' link to the next rule 1.46 which attempts to make a better diagnosis. Based on the pass-fail result of the diagnosis, as governed by the human experts, the knowledge based system attempts to refine it's diagnosis as we travel down the tree. In effect, the KBS limits the comparisons and decisions required in knowledge acquisition and maintenance.

You might be thinking, "Hey buddy! What's the big deal, that's just a decision tree!" And it is, but what we're gaining is the strong context provided by the 'if-true', 'if-false' links which strictly contain the addition of new rules. A new rule can only affect conclusions applied to cases previously falling under at most one rule and in general can only affect cases falling under the rule responsible for the conclusion if the new rule were not present. Any rule considered for addition to the system need only be applied underneath one rule.

The structure of the tree allows the computer to take care of all the dirty work, leaving the human designer the capability to apply his/her knowledge effectively within' the framework.