In 2008, Dr. Menzies authored a paper titled "Using Simulation to Investigate Requirements Prioritization Strategies". This paper showed the effects of project and requirement dynamism on the software development processes. In the Spring of 2008, he tasked his Artificial Intelligence class to expand on this model.

Thus, POM2 was born. One of the main differences between POM and POM2 is that POM focused on small teams and small projects. POM2 built its model around the 5 different branches proposed by Dr. Turner and Dr. Boehm. This varied the project size as well as introducing other factors. 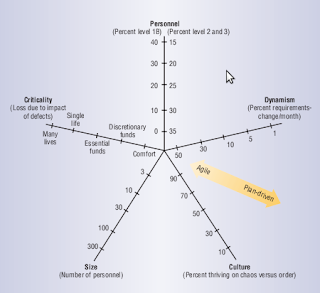 POM2 implimented all of the branches excluding Personnel. With the information available to us, Personnel was a wash. Better people cost more and produced more. Less talented people cost less and produced less. This lead to a near zero effect.

POM2 was then put through a Monte Carlo simulator while a KEYS search engine isolated the interesting areas in the simulator.

The main discovery is that Agile development methods performed as well as or better than Plan based development methods in all areas, especially excelling in dynamic environments. Further research is needed into the Personell and Criticality branches of POM2 to fully flesh out the model.