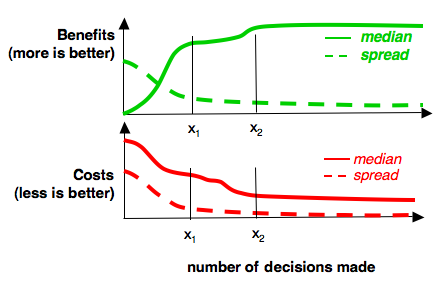 In order to optimize decision making about this model, we must first decide about these most upstream clashing reasons (the "keys"). Most of this model is completely irrelevant. In the context of reaching the goal, the only important discussions are the clashes {g,-g,j, -j}. Further, since {j, -j} are dependent on {g, -g}, then the core decision must be about variable g with two disputed values: true and false.

Setting the keys reduces the number of reachable states within the model. Formally, the reachable states reduce to the cross-product of all of the ranges of the collars. We call this the clumping effect. Only a small fraction of the possible states are actually reachable. This notion of $keys$ has been discovered and rediscovered
many times by many researchers. Historically, finding the keys has seen to be a very hard task. For example, finding the keys is analogous to finding the minimal environments of DeKleer's ATMS algorithm. Formally, this is logical abduction, which is an NP-hard task.

Our method for finding the keys uses a Bayesian sampling method. If a model contains keys then, by definition, those variables must appear in all solutions to that model. If model outputs are scored by some oracle, then the key variables are those with ranges that occur with very different frequencies in high/low scored model outputs. Therefore, we need not search for the keys- rather, we just need to keep frequency counts on how often ranges appear in best or rest outputs.

KEYS implements this Bayesian sampling methods. It has two main components - a greedy search and the BORE ranking heuristic. The greedy search explores a space of M mitigations over the course of M "eras". Initially, the entire set of mitigations is set randomly. During each era, one more mitigation is set to M_i=X_j, X_j being either true or false. In the original version of KEYS, the greedy search fixes one variable per era. Recent experiments use a newer version, called KEYS2, that fixes an increasing number of variables as the search progresses
(see below for details).

KEYS (and KEYS2), each era e generates a set
Posted by Gregory Gay at 8:00 PM